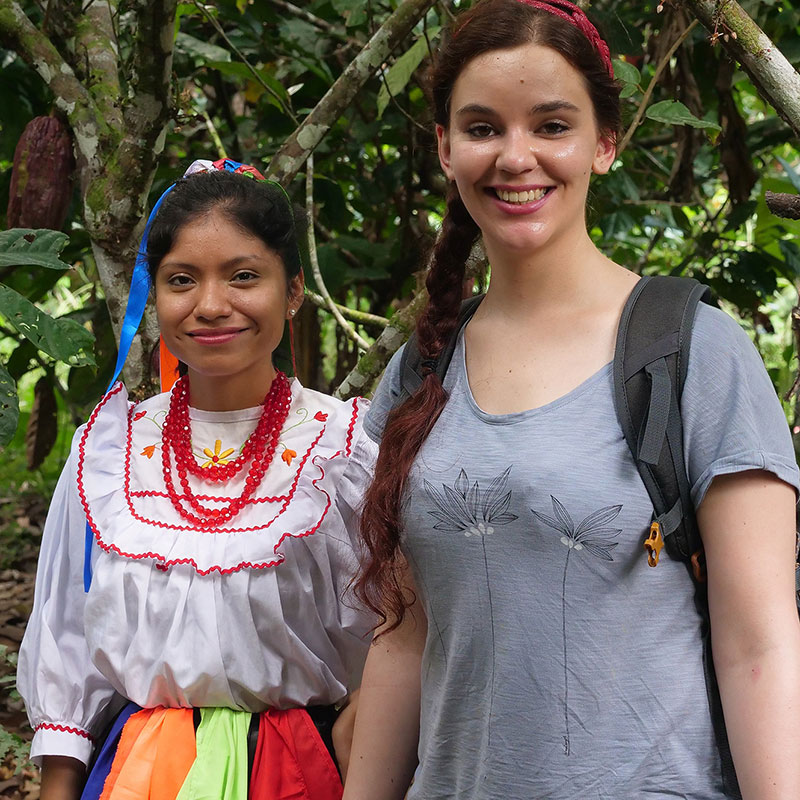 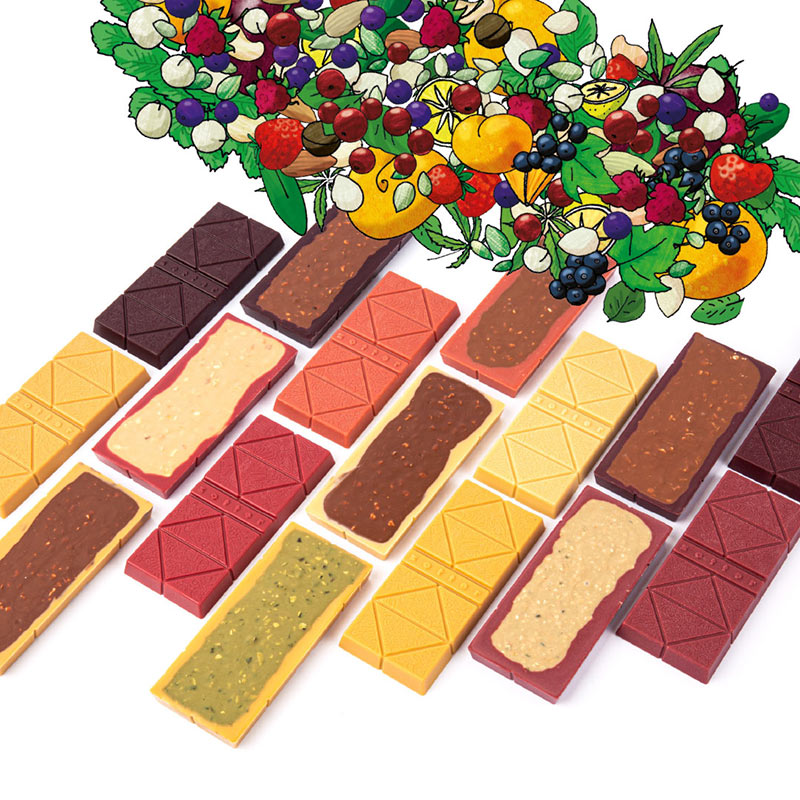 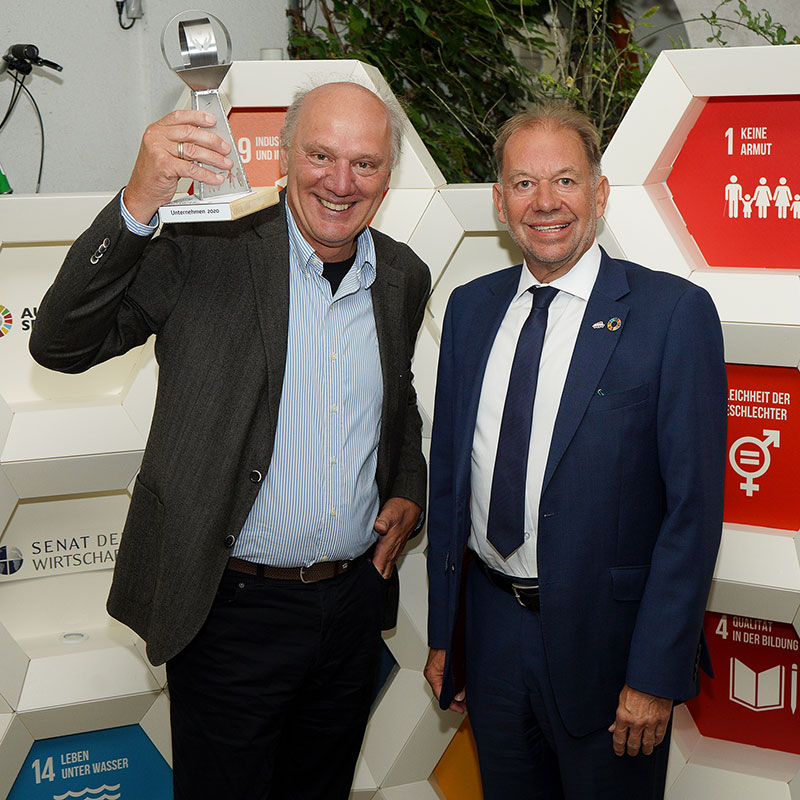 Ulrike Zotter continues to manage the company, otherwise this biography would end here.

Julia Zotter (*1987) built the chocolate theatre in Shanghai and ran it for three years (May2014-August 2017). Now she’s back with us in Austria and develops new products together with her father Josef Zotter. Julia spent a year in China (Xi-an and Beijing) during secondary school and went on to study food science and biotechnology at Vienna's University of Natural Resources and Life Sciences. For her final thesis, she travelled to Brazil to establish a cacao research project. In 2013, she graduates from the Cordon Bleu Academy in Paris with a Grand-Diplome in Pâtisserie and Cuisine as one of the best in her year. Julia has been working in all areas of the chocolate factory since she was a child and is a polyglot, speaking fluent English, French, Spanish, Portuguese, Chinese, German and even a little Latin.

Michael Zotter (*1988) also studied food science and biotechnology at Vienna's University of Natural Resources and Life Sciences and business information systems in Vienna. Michael is responsible for Zotter's website, online shop and everything else IT.

In 1987, founding of the Zotter family business: Together with his wife Ulrike Zotter, the 26-year-old Josef Zotter opens up the Zotter confectionary shop in Glacisstraße in Graz. The unusual creations such as "hemp slice", "the funny pie" and "scarlet runner bean roll with coriander" earn regional fame. Josef Zotter expands and opens up three more branches.

In 1992, Josef Zotter begins to produce chocolates in the back office of the confectionary shop in Graz and invents the hand-scooped chocolate, a mixture of inventiveness and handwork, filled in layers and plies. Also new are the 70 g format and the chocolate coating instead of the cubed breaking pattern. The varieties of the first hour: poppyseed-cinnamon, pumpkin brittle with marzipan, hemp, crudités, champagne and grilled walnuts with marzipan.

In 1994, chocolate and art blend together. Art designer Andreas h. Gratze turns the packaging into little works of art.

In 1999, the Zotters decide to bank entirely on chocolate. In the former stable of the parental farm, the z o t t e r chocolate manufactory is opened.

In 2001, Zotter began to travel to the countries of cacao cultivation and supported the farmers with development aid projects like “Quality instead of poverty“ and “Cocoa instead of cocaine“ and many more.

In 2007, expansion of the choco factory to bean-to-bar production and to the Chocolate Theatre.

Bean-to-bar: Zotter invests 18 million to process chocolate directly from the cacao bean onwards. The fairly traded organic cacao is purchased directly, roasted, ground, milled and conched. With this, Zotter lays the foundation for the development of the chocolate factory into a centre of competence for chocolate. Many new chocolates are created. Insourcing instead of outsourcing: Josef Zotter is now one of the few independent bean-to-bar producers in Europe and the first one to produce solely in organic and fair trade quality. (In general, only three global players produce a large part (about 80%) of the overall world-wide chocolate demand.)

Chocolate Theatre: Visitors can observe the production live, experience how chocolate is made from the bean onwards and try, at various tasting stations, intermediate products such as milling powder and of course also the finished bars.

In 2011, Zotter opens up the Edible Zoo as open-air part of the Chocolate Theatre. 27 hectares of adventure farming (a total of 95 hectares of organically cultivated farming, 27 hectares of which are accessible to visitors), where Zotter serves the visitors organic meals, directly from his own pastures and gardens.

In 2014, Zotter opens the Chocolate Theatre in Shanghai, which daughter Julia Zotter subsequently runs until 2017. It’s a chocolate adventure world with tasting tour included, spread out over a 2400 square metre space. Within a very short time, the Chocolate Theatre has established itself as THE place to be in the thriving megacity of Shanghai. The “Shanghai Wall Street Journal“ and “Smart Shanghai“ name it as one of its top sightseeing destinations. Julia Zotter’s “No Pants“ events proves particularly popular. In the autumn of 2017, Julia returns to the choco factory in Austria in order to work on product development. Shanghai’s Chocolate Theatre and Shop are now run by general manager Amy Fang.

In 2015, Zotter launched a shop in the US. The subsidiary is increasingly focused on online sales – there is only one retail shop at the Cape Coral/Florida branch location.

In 2016, Riegersburg chocolate shop extension. Featuring a wall of manure reminiscent of the stable it once was, a big bonbon counter where customers can put together their own bonbon boxes, a Labooko library, a green, leafy storefront and a low waste station where you can buy Zotter chocolates in bulk, without any of the wrapping.

In 2017, the world’s first Choco Robots start working at Zotter. Industry 4.0 means blending skilled handicraft with innovation. Zotter wants to demonstrate that robots do not eliminate jobs but instead substitute other machines, thereby safeguarding the future of existing employees. The robots add more precision to the process and enable individual manufacturing. At the moment they are putting fillings into the wafer-thin Nashido bars. In the future, Josef Zotter wants to deploy the robots to produce individual bonbons, tailored to specific customers. The demand for individual and one-of-a-kind products will continue to rise. The choco robots are also one-of-a-kind – they were developed by a group of students in the face of initial resistance by older engineers. The robots are the first of their kind and are a perfect fit for Zotter and our desire to increasingly invest in innovative ideas.

In 2017, Josef Zotter travels to Peru and Madagascar for film shoots. In Peru, it’s a film about growing organic cacao in place of producing cocaine, which is playing at the Chocolate Theatre, and in Madagascar, he makes a Virtual Reality Film. Visitors to the Chocolate Theatre can put VR goggles on and dive into the cacao jungle.

In 2017, Zotter celebrates the company’s 30-year anniversary: in 1987, Josef Zotter opens his first confectionery shop in Graz/Austria, marries Ulrike and the couple welcome their daughter Julia. This heralds the eventful start of the family business and the beginning of a slice of chocolate history.

2019 The chocolate theatre expands: The Panorama Choco Space is added and increases the chocolate theatre by 200 m2. Further additions are many new tasting stations including a chocolate Ferris wheel, bonbon roller coasters, a robot serving chocolate snacks you can order via touchscreen menu, a dental clinic with sugar-free chocolates, a Hammer Choc workshop and much more.

2019 Zotter reacts to the political »Ibiza scandal« with a »Bergl not Ibiza«-chocolate bar. Instead of the rather conventional Red Bull and vodka, Zotter combines hemp praline and plum schnapps with a blue blackcurrant layer. Naturally the chocolate is also “white-washed” with a white chocolate coat. The »Bergl not Ibiza« chocolate bar is an instant success.

2020 The new chocolate season is heavy on classics, pralines and nut varieties. Nuts are very on trend – all over the world and of course also at Zotter’s – popular classics with precious ingredients, which you can enjoy as a trendy comfort food. Nuts dominate our new collection.

We opened the new season with 16 new, hand-scooped Chocolates – real classics like Choco Mousse, available in white, milk and dark chocolate. We also offer wine classics like White Wine from our own vineyards and Sweet Wine "Red" created by a top winemaker. We are offering moments of nutty indulgence with Marzipan and Almonds and Chestnut + Cranberry, a fruity and nutty delicacy. New sugar alternatives are featured as well, for example in our crispy Granola + Fruit creation, sweetened with maple sugar. And the craziest chocolate of the season Cola & Popcorn comes from Julia Zotter, mixed from Austrian Cola, cola jelly and caramelised popcorn in almond nougat.

With our charity chocolate Chocolate Banana, we are supporting a new project: 50 cents out of every chocolate sold go towards the Caritas children’s charity project “Chocolate for School” in Uganda.

The Squaring the Circle range introduces an entirely new chocolate assortment with a focus on sugar-free chocolates and exciting sugar alternatives. Featuring trendy date sugar, erythritol organic, no-calorie sweetener, fructose contained in added bits of mango, two new nut bars and much more. It consists of 13 chocolate varieties, all focusing on the hot topic of sugar.

2020 A brand new addition to the Zotter range is the Fruit Bar. We turn colourful fruit couvertures made from freeze-dried fruit, raw cane sugar and pure cocoa butter into delicious, soft and fruity dreams. Enhanced with lots of small fruit pieces, which give the bar its crispy crunch as well as stunning colours and a natural fruity flavour, which are derived entirely from berries and other fruit.

2020The book "A New Economy" (Eine neue Wirtschaft) by Josef Zotter, Johannes Gutmann and Robert Rogner is published. Our experience of the Covid pandemic is also an opportunity to start over. The economy should serve the people, not the other way around. Let's get our economy back and fill it with purpose. For a meaningful and sustainable economy that benefits us all.

2021 At the beginning of the year, still during the Corona lockdown, the entrance area to the Zotter Experience World was redesigned. The "Green Gallery" is a green lounge area with photovoltaic panels integrated into the glass roof and a terrace for the shop, which has also been redesigned and expanded to include a new delicatessen shop. In summer, we reopened the Art Park with ponds inside the Edible Zoo. On display are numerous colourful and creatively designed installations and sculptures by renowned artists such as Paul Mühlbauer, Helmut Kohl and Josef Lederer.

2022/23 Zotter celebrates 30 years of hand-scooped chocolates. Together with his daughter Julia, Josef Zotter again created many new hand-scooped flavours: classics like Poppy Seed & Cherry and Vanilla + Crisps and innovative flavours like PawPaw hailing from the South Tyrol. New in our range are also many hand-scooped chocolate minis and mini gifts like Thank You or Stress Stopper. And our Mitzi Blue appears in an entirely new design, featuring small product images on the wrappers.