Josef Zotter recently celebrated his 60th birthday. This did not escape the attention of the Austrian media. They took the occasion of the Styrian chocolatier's birthday to ask him for interviews. In the ORF Radio Steiermark "Gesprächsstoff" feature, he explains how his former business failure still helps him today and why he would like to have "failure" as a school subject. Josef Zotter also tells us what we can learn from African cocoa farmers, why he believes that the Corona pandemic will lead us to a better future and what his secret recipe is against a possible pension shock. Listen here until February 28th (German only)

In the Krone Zeitung article in the print edition of February 22nd, Josef Zotter explains why he will not cut any corners from now on and has abandoned locust and fish-head chocolate, how he has managed to employ 20 more staff than before the Corona crisis, and what he is determined to achieve for himself. Go to article (German only)

In an interview with the Kleine Zeitung, Josef Zotter adds why there can be no innovation without risk: "Provocation is important to me. We must not be so well-behaved. That is to say, well-behaved in the sense of not risking anything and not knocking anything - that's not how innovation comes about," says Zotter, as he leads a tour of the construction site at the chocolate shop. "The whole forecourt is being changed. There will be a planted glass tunnel with a photovoltaic system that will provide shade at the same time. It will be like a jungle, with plants hanging down and the figures coming from my artists," says Zotter, describing his fireworks of ideas. Go to article (German only)

In an interview with the OÖ Nachrichten, Josef Zotter talks about his political chocolate creations, useful steps backwards in the economy and the Edible Zoo. He also reveals which childhood memories he associates with chocolate, what he learns from his own children and what he gives them for the future. Go to article (German only) 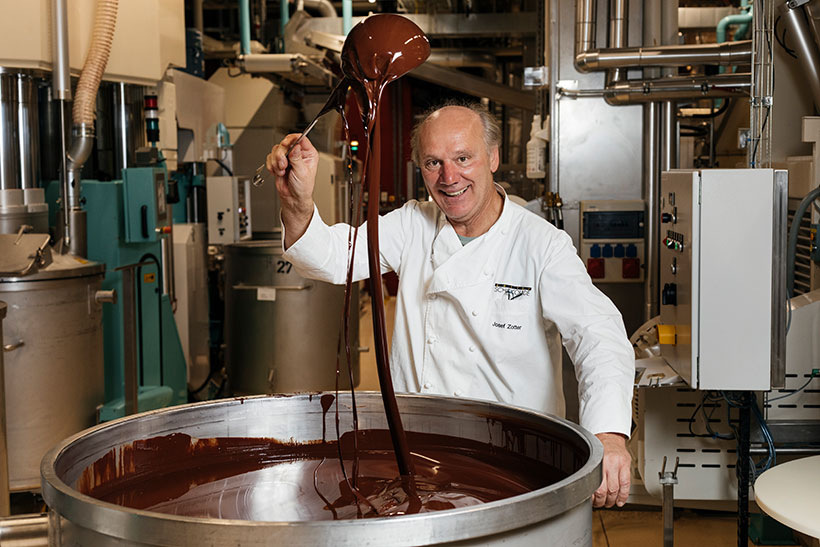