Every year since 2014, in accordance with the European spirit of unity, connection and integration, the Walter Scheel Medal for lifestyle and gastronomy has been given out for outstanding services to European cuisine and gastronomy. The honourees are usually two individuals who have made exceptional contributions in these areas and to our cultural heritage. The award was created under the patronage of H.E. Valéry Giscard d’Estaing, former President of the Republic of France.

The 2019 Walter Scheel Medal has been awarded to Josef Zotter in the centenary of Walter Scheel’s birthday, the former President of Germany, during a formal evening ceremony at the Villa Hammerschmidt, the official presidential residence in Bonn.

Jury award justification: »Josef ZOTTER – Zotter Chocolate Manufactory, Riegersburg – has been awarded the 13th annual Walter Scheel Medal to honour his exceptional contribution to the development of our great European chocolate culture. Josef Zotter is a true paragon of a business owner: innovative, determined and persistent and at the same time modest and down-to-earth. He is one of the world’s best chocolate producers and shows that competence and top artisanal product quality are not synonymous with an elitist approach and that fairness and sustainability can be much more than just marketing speak. With his highly innovative product range, his “bean to bar” processes and exclusively organic and fair trade produce, Josef Zotter impressively demonstrates how successful ethical business practices can become in the 21st century. His creations, meanwhile, keep scoring top marks in international competitions«

Josef Zotter:»The Walter Scheel Medal, to me, is one of the biggest awards in the history of our company. Walter Scheel was a pioneer in many areas including migration. He recognised that development aid and the ecologisation of agriculture work best through fair trade, a practice that allows each trading partner to be appreciated and to retain their dignity. We all love our native lands, after all. This reflects our approach to fair trade: we don’t distribute alms and donations but instead improve product and flavour quality on equal terms with the producers. When your palate is inspired, food and drink will take on a new significance and creativity will be unleashed. This is the kind of thinking that should be applied to issues like climate change as well. Each tiny contribution makes a difference and is better than none at all, especially when everyone decides to do it. But we have to start now! My particular gratitude goes to the Zotter staff, the “best employees in the world”. We can only create culinary sensations by working together as well as we do.«

Image: Honours in memory of former President Scheel are bestowed upon Josef Zotter, Patrick and Felix Dietrich and István Szepsy jr. in lieu of his father (from left to right). Image copyright: Matthias Jung 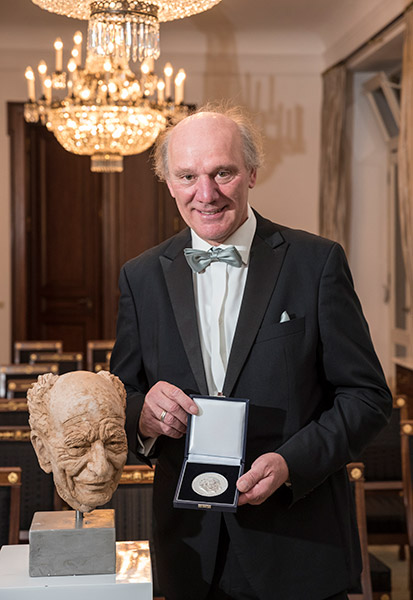 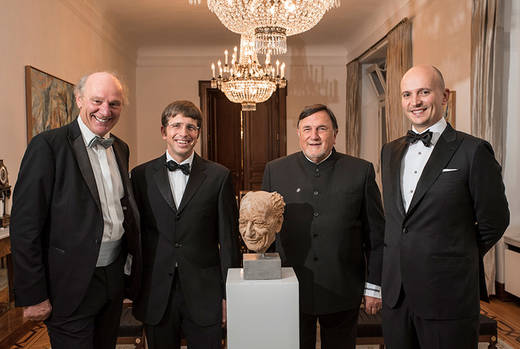